The worship of former President of Azerbaijan Heydar Aliyev is so exaggerated that an American blogger Andreas Moser on his visit to Baku and Ganja encountered the “great leader’s” monuments and buildings everywhere he went. Moser wrote in his blog a satirical report, excerpts of which are reproduced below for our readers’ great amusement! 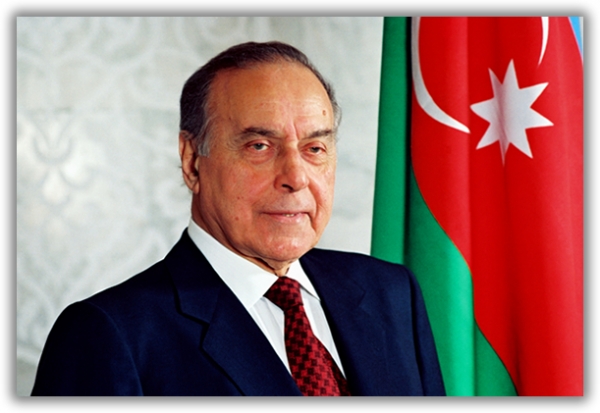 Moser started his journey by visiting a park, naturally named the Heydar Aliyev Park, which was “larger than some independent states…. When you have crossed the widest street in the world [12-lanes] after a march of ten minutes, you have reached the parking area. A car park like the one in front of the Olympic stadium. It was planned big enough that all cars in Azerbaijan could park here simultaneously. But it is empty. The public squares in the city were already overdimensioned, but this here is megalomania at a North Korean level…. Once you have walked through the triumphal arch (as big as in Paris and, for the avoidance of any doubt, adorned with the name of Heydar Aliyev), which is the actual entrance, you have to traipse for another mile to reach the Heydar Aliyev Museum. Just like people had to walk through a long hall in the royal palace before meeting the king.”

Making his way through the Park’s army of cleaners and scrubbers, “cleaning maniacs,” Moser came across an oversized statue of the “great leader” with his name engraved on it in golden letters, in front of the Heydar Aliyev Museum. Moser discovered that “the museum is three floors high, with a glass dome, much marble, much gold and white leather armchairs. Typical dictator kitsch. If you have ever visited the Gaddafis, the Husseins or the Trumps, you are familiar with it. I am the only visitor, which startles the man behind the desk so much that he turns off his YouTube video, jumps up and henceforth follows my every step, always four to five meters to my side and always looking at his phone when I look at him. We are the only two people in the whole building.”

Moser presented Heydar Aliyev’s background by quoting prize-winning Polish journalist Ryszard Kapuscinski who wrote: “At first, Heydar Aliyev was head of the KGB in Azerbaijan, then, in the seventies, First Secretary of the Communist Party of the republic. He was a disciple of Brezhnev, who appointed him Deputy Prime Minister of the USSR. He was fired from that post by Gorbachev in 1987. Heydar Aliyev was part of Brezhnev’s circle -- a group standing out for deep corruption, preference for any kind of luxury and overall debauchery. They displayed that corruption with provoking openness, not ashamed in the least.”

Moser stated that the Polish journalist’s description “could be the motto for the museum, actually the whole park or indeed for the whole country. For someone who was already famous for open corruption under communism, an independent Azerbaijan with gushing oil wells must have been the mother of all dreams. Thus, it comes as no surprise to meet the whole Aliyev family in the Panama Papers [offshore secret accounts].”

Moser concluded his humorous article by remembering other Heydar Aliyev Parks in Podgorica, Montenegro, Tbilisi, Istanbul, Ankara, Bucharest, Kiev, “and maybe soon in your hometown. You simply have to talk to your city council about it. Azerbaijan will pay for everything.”

In his last sentence, Moser described Azerbaijan “as a strange country. But at least I don’t have to visit North Korea anymore.”

In addition to Moser’s article, Wikipedia has a whole section titled, “Heydar Aliyev’s Cult of Personality” as follows: “Every city and town in Azerbaijan has a street named after Heydar Aliyev, including one of the central avenues of capital Baku. According to official information, there are 60 museums and centers of Heydar Aliyev in Azerbaijan.”

Furthermore, there are statues of Heydar Aliyev in over a dozen countries around the world. However, Azerbaijan suffered a major embarrassment in Mexico City when its sensible City Council decided to remove the massive statue of Heydar Aliyev from a park on the city’s main avenue that Azerbaijan had paid to have renovated. “Human rights activists had objected to the statue and pointed to the repressive nature of Mr. Aliyev’s rule,” according to BBC News.

My advice to Azeri worshippers of Heydar Aliyev is to worry more about the fate of their current President, Ilham Aliyev, rather than the deceased Heydar Aliyev, because Armenia’s recent ‘Velvet Revolution’ may soon spread to Azerbaijan, which might be more bloody than velvety!