Both Armenia and Azerbaijan could use a peace dividend 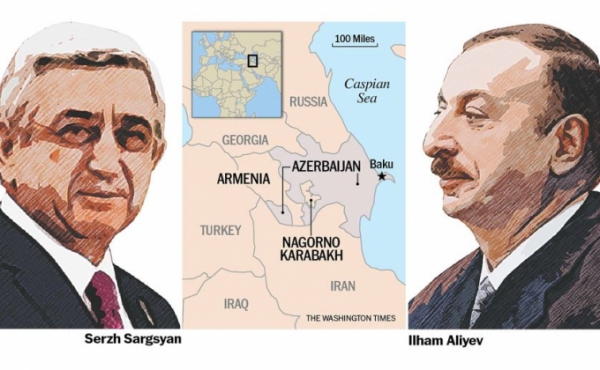 President Obama will host and convene the Fourth Nuclear Security Summit beginning on March 31 at the Washington Convention Center. Among the scheduled attendees are two leaders who rarely get together because their nations have been at loggerheads for decades.

While it is important for world leaders to agree on how best to keep nuclear weapons out of the hands of rogue nations or terrorist groups, the presence of Presidents Ilham Aliyev of Azerbaijan and Serzh Sargsyan of Armenia offers a rare yet historic moment for President Obama to take the lead in solving one of the most troublesome conflicts left from the break-up off the Soviet Empire. Regional experts have taken to calling a seemingly intractable dispute between the two nations over ownership of the territory of Nagorno-Karabakh the “frozen conflict.” In 1991, full-scale war broke out between Armenia and Azerbaijan and despite a cease-fire in 1994, border skirmishes and fighting continues to this day, over a million people have been displaced and Armenian forces occupy close to 20 percent of Azerbaijan’s territory.

The United States, along with Russia and France, co-chairs the Minsk Group tasked with resolving this conflict. Moscow has treated Armenia as its own and provided her government military support that has prolonged the conflict while Washington has been too busy with distractions in the Middle East to take a lead role in establishing a lasting peace between Yerevan and Baku.

President Obama may well be in a position to craft a breakthrough while the two leaders are in Washington that could create a new beginning for the people of Armenia and Azerbaijan by leading a robust diplomatic initiative to find a permanent solution fair to both sides.

As one of the few countries that have recognized the Armenian genocide of the last century, France is in a position play a key role in a U.S. diplomatic initiative. Indeed, Washington and Paris are very well positioned to serve as honest brokers urging Armenia to vie for a permanent peace with its neighbor. The message from President Obama — and President Francois Hollande — to the Armenian people is simple: the best way to remember the memory of those 1.5 million killed by the Ottoman Empire is to build a vibrant, dynamic and inclusive Armenia at peace with its neighbors.

Indeed, despite millions of dollars that continues to flow into Armeniafrom its diaspora, Armenia’s GDP per capita is stagnant. Today it stands at $3500 and its GDP and would be much lower but for some $10 billion in diaspora remittances. Azerbaijan’s economy meanwhile, fueled in part by its oil, has grown at an average annual rate of 12 percent, allowing millions of Azeris to enter the middle class with the nation’s poverty rate plummeting from 47 percent to 8 percent according to the UNDP.

Despite these differences, both Armenia and Azerbaijan would benefit from a peace dividend. An American-led diplomatic resolution of the conflict would unleash growth in a post-conflict environment. Trade and commerce between Armenia and Azerbaijan — two cultures with a deep entrepreneurial spirit written into their DNA — would have an immediate impact on the lives of millions.

George Clemenceau once said: “It is far easier to make war than to make peace,” a fact that is clear in the Middle East. But the inability to solve all problems everywhere shouldn’t lead to unwillingness to solve those that can in fact be solved.

Mr. Obama should work with the two leaders to craft a plan that will lead to the withdrawal of Armenian forces from territories it occupies withinAzerbaijan, an agreement from both sides to provide autonomy to the region of Nagorno-Karabakh so that Armenians within the region will not have to fear Baku even if U.S., French and Russian peacekeepers are needed at least in the short term with the costs of such a force paid by cash-rich Azerbaijan.

Further, a settlement might well include an Armenia-Azerbaijan Reconciliation and Reconstruction Fund that would invest in infrastructure projects between the two countries and Azerbaijan-financed extension of its gas export pipeline to Europe through Armenia.

And finally, a Cross-Culture Fund perhaps headed by the first lady ofAzerbaijan, Mehriban Aliyeva and the first Lady of Armenia, Rita Sargsyan, with the explicit goal of rebuilding the religious tolerance that existed between Armenians and Azerbaijanis before 1991.

The key is to such a deal is American leadership. Mr. Obama needs to persuade the presidents of both Armenia and Azerbaijan that the United States won’t turn its back on them and that a workable solution can satisfy both nations, allow their citizens to live in peace and allow them to at long last develop the trust to be good and cooperative neighbors in a troubled region of the world.

Holocaust survivor Elie Weisel once said that “peace is not God’s gift to his creatures; peace is our gift to each other.” By being a leader of consequence, President Obama can give the gift of peace to Armenia andAzerbaijan.