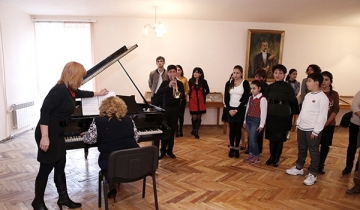 Within the frames of the working visit to Shengavit district Yerevan Mayor Taron Margaryan visited the musical school after Armen Tigranyan which opened its doors after the capital repair. Accompanied by the head of the district the Mayor familiarized himself with the work done. Talking to the staff of the school, the pupils and their parents Taron Margaryan stressed that the program will be long lasting and all the cultural and educational centers of the capital will be provided with necessary conditions.

The Mayor also added that the problem of equipment and furniture is gradually being solved too. The director of the school Anahit Gevorgyan in her turn stressed that the program had been awaited both by the staff and the pupils. «The school founded in 1948 had never been repaired and the facilities in the school were rather poor. The policy of the Municipality of Yerevan aimed at the improvement of the facilities in cultural and educational establishments is a very important step in the upbringing and education of a generation interested in art and culture», said Anahit Gevorgyan.

Information and Public Relations Department
of the Municipality of Yerevan