Dubai Police dismiss rumours that Burj Khalifa is on fire 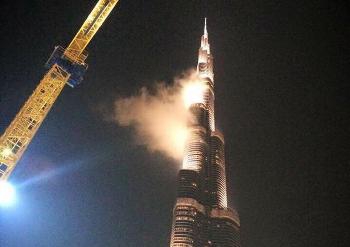 Dubai Police has dismissed the pictures circulating on social media on Sunday of smoke emanating from the Burj Khalifa as fake.

An image started circulating most notably on Twitter appearing to show smoke coming out of the world’s tallest building at about its midway point, using the hashtag #Burjkhalifafire. However, police dismissed this, saying it was the cloud and fog around the Burj creating a smoke-like effect.

“It’s that time of the year when clouds gather around Burj Khalifa and trick us. It’s just fog, our beloved Burj Khalifa is safe & shining!,” the Dubai Police tweeted. The message was re-tweeted on the Burj Khalifa’s Twitter account.

A Dubai resident, who did not wish to give their name, said that a similar picture circulated on social media last year.

“It’s a false picture. Everything is peaceful in and around Burj Khalifa,” he said.

Many UAE residents took to Twitter to denounce those spreading rumours the Burj was on fire.