New Year’s Day has become synonymous with the Pasadena Tournament of Roses Parade that is broadcast live nationally. For the fifth consecutive year, the Armenian American Rose Float Association took part in what was the 130th iteration of the Rose Parade.

Carrying the theme “Chanting Stones: Karahunj,” the Armenian rose float celebrated the greatness of Armenian culture, echoing the general theme of the 130th Pasadena Tournament of Roses, which was “The Melody of Life.”

The design of the Armenian rose float was inspired by the stones of Karahunj, a prehistoric monument consisting of a formation of megaliths, in Armenia’s Syunik Province, and often referred to as “the Armenian Stonehenge.” “Karahunj,” which means “speaking stones” or “chanting stones,” refers to the fact that on windy days, the massive standing stones of Karahunj make a distinctive whistling sound. Karahunj predates Stonehenge by 3,500 years. 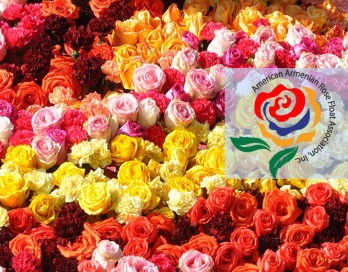 In keeping with the musical theme of the 2019 Tournament of Roses, the Armenian float featured a dynamic, exuberant design, with several Armenian musical and cultural references. The central element consisted of a duo of dancers performing the yarkhushta, a beloved Armenian folk dance. The two dancing figures were taken from a painting by the acclaimed artist Meruzhan Khachatryan. The dancers are seen performing atop a formation of rocks adorned with khazes, the uniquely Armenian notes representing the ancient Armenian system of musical notation. The inclusion of the khazes here is particularly significant as it honors the 150th anniversary of the birth of Komitas, the renowned musicologist who was devoted to the decipherment of the khaz system.

Other elements of the float’s design included a scattering of apricot trees (the Latin name of the apricot, prunus armeniaca, means “Armenian plum”), as well as a duduk player and three Armenian mouflons, an endangered subspecies of wild sheep.

The float was surrounded by dancers wearing traditional Armenian costumes who accompanied the float on the parade route.

Last year the Armenia float won the organization’s “Judges Award” for “the most outstanding float design and dramatic impact.” In 2017, the Armenian float won the “Past President’s Trophy” for the most creative design and use of floral and non-floral elements.

Near the end of the parade, the Chinese American Heritage Foundation’s float caught fire and threw the order of performances in disarray, with some people leaving the parade before it was over. Despite the confusion, however, the parade regained its momentum.